I took up a new hobby in August. Therefore blog writing has been put aside.
I started playing the piano. From scratch.

Learning new things are great, but learning how to play the piano while living in Poland, turned out to require a bit of creativity.
I found on the internet (with the help of Google translate) a two year old posting from a lady that was offering piano lessons for children in Krakow. I contacted her and asked if she spoke any English, and if she would be willing to teach beginners piano for “bigger kids” as well. She replied that she can give it a try, and we agreed to meet.
Since then we have met one a week in her home playing Polish children’s songs and going trough music theory and piano playing technique.
We are using my music theory book that is in Swedish, as it interestingly turned out, that Polish and Swedish music vocabulary is closer to each other than English. So I use the Swedish term and she the Polish, and we most of the times, we understand each other.

My piano teacher has a very old wooden piano in her flat, with her own name engraved on  it. As a bonus, she has a cat, Piesek, (means little dog) who is always participating in the piano classes by sitting on top of the piano while I play.

My goal was to be able to play the theme song from the movie Forrest Gump by the end of this year. I still have two weeks to practice.

Last week I found myself in the Berlin underground, 5 o’clock on a Monday afternoon. Rush hour.

My metro was arriving in 6 minutes, so I took the time to observe people.

Sometimes when I am observing people who are trying to catch the train, going to work, running errands or whatever is making them run so fast, I can feel extreme anxiety. Am I competing with all these people for jobs, money, love, health and attention? Is it worth stressing over that exam, that deadline, answering all those e-mails with Usain Bolt speed, freaking out over delays, having a tidy home, catching that train, getting to work on time?

For a moment, looking at someone running for the train made feel that, the only thing that really matters in life is to take care of yourself and the people around you so we all can be happy, safe and healthy.

Then my metro came.

The following pictures are all taken during my evening walks and runs. I have to say that it is never boring to exercise outdoors in Krakow.

This summer I was in Finland for my summer holiday and decided to take pictures of my hometown and of the places I used to spend my childhood. Looking at my home country through the tourist linse, I realized that it is actually scenically stunning!

The Finnish archipelago is one of the few places in the world where my soul truly rests.

Commuting to work can be a pain in the neck. Hot, overcrowded trains which are usually delayed. Commuting in Krakow includes all of the above, but every now and then there are some unexpected moments that inspire me to pull out my camera.

A quite absurd fact is that the end station of the train I take to work every morning is Auschwitz.

Once in Australia, one place that was a must for me to visit, was Uluru. Bluntly said, Uluru is a lump of orange sandstone that rises from the flat plains of the Australian desert, and is situated about 500 km southwest of Alice Springs in the Northern territory Outback. Uluru comprises of a single piece of rock which is almost 10kms in circumference.

One big discussion about Uluru is weather you should climb it or not. For me it was always clear I wouldn’t climb it. Uluru is of great spiritual significance for the aborigines who own and administer the land on which the rock stands.  They even specifically state that they prefer visitors not to climb Uluru. Still people do it. I mean, I wouldn’t go climbing on the roof of anybodies church or mosk either, would I?

Uluru is impressive, and the 10km hike around it was definitely worth it, despite the 38’c heath and enormous amount of tourists. However, what impressed me more was the nearby Kata Tjuta which comprise of several sandstone formations which you can actually hike through, not only walk around.

One thing that I find difficult to change, even when living in a different culture, is food habits. With that I do not only mean what I eat, but also, when I eat.

For me what the French eat for breakfast is what I would only eat for desert. The Irish again, eat a breakfast I would call lunch. I am brought up in a family where we eat a big lunch at 2 pm, and only something small for dinner. To eat something sweet for breakfast was definitely never acceptable. In the Netherlands I was faced with the local tradition of only eating some sandwiches or a small soup during the day, and then have the main meal in the evening. To the other extreme, I remember that in India the mornings started with a cup of tea at 7 am, and then the actual lunch was already at 10 am.

This cultural difference in food habits is also very clearly seen at my current work place. My fellow country men seem to have their proper lunch at 11 or latest at noon, whereas the Polish eat a few hours later. Polish people have a habit of eating a “second breakfast” before lunch, therefore they have the actual lunch much later. To compare, when I was living in Ireland with a bunch of Spanish people, they started cooking their dinner when I was ready to go to bed. I have observed that the more south you go on the map, the later people eat the main meal of the day.

Living abroad also introduces you to new flavors and food habits. I had for example not eaten Nutella or peanut-butter before I started traveling. It’s just not something you put on bread at home. Rather, stacking all kinds of vegetables on top of your bread is considered normal. Today I can easily debate if smooth or crunchy peanut-butter goes better with banana on toast. Smack on a bit of jam and you are good to go.

Then again, in some countries I have been offered things that I couldn’t even describe what it was. Like for example in Nigeria I was offered something that wasn’t potato or rise, but something in between, but yet nothing close.  Another interesting observation from my travels in Africa was that people there seem to prefer bitter flavors over sweet. Did you know that Guinness is the big hit drink in African countries? I can’t tell you what a conflict it was in my head to have a warm pint of Guinness in a dusty pub in the Legosian suburb. The truth was that the Guinness tasted much better there than it did back in Ireland.

In Australia a normal Sunday barbeque consisted of crocodile, kangaroo and shark meat. The shark meat was brought straight from the sea by the fishermen (and women!) who lived in the same house as I did. I never came to ask them where they had caught the crocodile though… The thought of eating a kangaroo was weird, but as I told the Aussies that where I come from we eat Rudolf the reindeer, it might as well be acceptable to eat Skippy the Kangaroo. It is all about what you are used to, I suppose.

For some reason I have always been prone to be approached by total strangers. Mostly they just ask for directions, but surprisingly often they also come and tell me their whole life story.

Some time back I was traveling from Krakow to Amsterdam. I was waiting for my plane to start boarding, drinking a cappuccino for breakfast, completely minding my own business, when a man in his 60’s comes and sits next to me. He makes a lot of noise putting down his bag and then he said: It’s incredibly hot in here, don’t you think?                                  Me, covered in a thick sweater, jacket and scarf, could only agree.

In the course of the next ten minutes I get a full briefing why this man was in Poland. His name was Andrzej and came from Florida. Andrzej himself was born in Poland. He told me that his mother had died when he was one year old, then he and his father had moved to the states where the father had decided to put Andrzej in an orphanage until the age of six when the father remarried. The conversation continued about all the handicaps he had gotten from the Vietnam war and that he had now been in Poland to look for more information about his ancestors. Then he excused himself as his plane was boarding.

Most of the times I don’t mind listening to peoples stories and quite happily respond to a strangers invitation to a conversation. This man obviously just wanted to talk to somebody. Listening to what some people have gone through, it really gives your a perspective on your own life. Things could have been very different.

Doves on the roof of the bus stop. Krakow, Poland

Not so eager to be photographed. Bielefeld, Germany

Traveling in countries where you stand out because of your physical appearance can be a bit intimidating. Personally I just don’t seem to get used to people staring at me, although the stares are harmless and just curiosity for the most part. But when it comes to children, I have to say, that the reactions and truly surprised faces they give me when they see me, are priceless!

What has been on my mind

Say what’s on your mind! 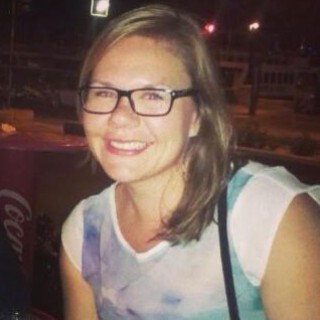 I am a 30 year old Finn that is currently living and working in Poland. In this blog I exhibit my photography and drawings and reflect over various things with the power and the inspiration my travels have given me. The real meaning of traveling has for me become not only to discover new landscapes, but to have new eyes. This blog is a part of my journey to see the world and in a new way.